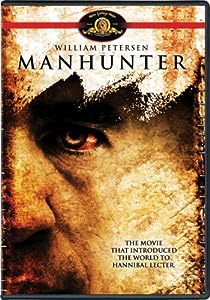 I watched “Manhunter” last night. If you don’t know the movie, it was the first film to feature serial killer Hannibal Lecter (of “Silence of the Lambs” fame).

It is by no means, in my opinion, as good as SotL. It’s very dated and doesn’t hold up well style wise. It is fun to see all the character actors in the cast though and I didn’t even recognize Joan Allen in the film.

As a psychological thriller, it’s very slow paced and William Petersen’s moody stares get trying quickly. The best scenes are actually between Allen and Tom Noonan who plays the bad guy. There’s a point where you think he might be redeemable if only…

The best part was rediscovering the music of a band I loved in the 80s – Shriekback. I wore out their “Oil and Gold” album.

Overall, it would make a good doubleheader flick with the much lauded SotL.