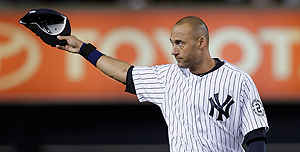 I’ve been a New York Yankees fan for as long as I can remember. But I’ve never been a “fan” of any individual player.

By that I mean, I don’t get too wrapped up in the players themselves. No sports ball player is a “hero” to me. That word should be reserved for people who do actual heroic things – not hit balls with sticks. These guys are just playing games for my amusement – and ridiculously large sums of money.

While I wouldn’t describe Derek Jeter as a hero, I would describe him as an incredibly talented, arguably great, baseball player, a classy guy and someone who, as the old timers say, “plays the game the right way”.

He never embarrassed his team, his fellow players, his organization, his fans or his city. There have been the occasional minor personal life things but I don’t care about his or anyone else’s personal life. Besides, he’s young, rich, single and lives in New York – let him serial date whoever he wants to.

One of the nicest things my ex ever did was take me to Yankee Stadium on my birthday. We bought overpriced souvenirs, drank beer, ate hot dogs and had a great time. I spent the entire game watching Jeter like I was 12 years old.

Another of my fondest memories is the day Mike Rose and I spent at Yankee Stadium. I was going through the divorce from the aforementioned ex and needed a mental health break. I called up Mike and he agreed to go to a Yankees game with me (I bribed him with the carrot of getting a tour of the Stadium from a YML listener who was a behind the scenes guy for Yankees IT). Another wonderful day spent drinking beer, eating hot dogs and watching Derek Jeter.

I enjoyed watching him play. I enjoyed the way he would so often rise to the occasion and help “my Yankees” win a game, a playoff, a World Series.

As he rose to yet another occasion last night, I was thinking, is there anyone else in baseball who could take his place?

But no one will ever take Jeter’s place.

Congratulations Captain. Thanks for all the memories. You make me proud to be a New York Yankee fan.