This past weekend, Kim and I went out test driving vehicles. First to Daytona Motorsports in Surrey so I could test a Zero Electric motorcycle – specifically the Zero S model – and then out to Langley to Sea to Sky Motorsports to test the Polaris Slingshot. By comparison, we rode my Yamaha FJR 1300 ES.

Both test rides were interesting but, from my point of view, both vehicles are fatally flawed.

One of the things riders like is the complete involvement in riding. Unlike an automatic car, on a bike, your whole body is involved. Both hands are operating the vehicle as are both feet. If you’re a good rider, your head is constantly swiveling, looking for threats. Your eyes are all over the place, looking for a million things – road conditions, traffic, soccer moms, speed, corner arc, etc. For aggressive riders, you can move your body back and forth and from side to side to help steer and control the bike. For a lot of us, that “involvement” is why we ride.

On a Zero, at least some of those things are taken away from you. In one respect, it’s like driving an automatic car. The Zero is, by its nature, an automatic motorcycle – there’s no clutch, no gears, no shifting. But those are some of the things riders find fun.

The Zero model I rode was the S version, the base model. It was way too small for me but that’s not a knock on the bike. But all models of the Zero weigh significantly less than my 650+lbs FJR – that’s both good and bad. The Zero, even on my short, tentative test ride, was nimble in traffic (and a lot narrower than my bag-equipped FJR) and fun to throw into curves.

One of the big advantages of any electric vehicle is generally considered torque – when you twist the throttle or put your foot down on the “gas” pedal, they LEAP forward. The Zero was no different. Even with me on top of it (I’m 240lbs – the poor little Zero is only 408lbs), the Zero had plenty of acceleration. The problem often came under deceleration – and this is where being a “real rider” comes into play.

On both manual cars and motorcycles, you have engine braking – that is, when you get off the gas, the engine starts slowing the vehicle down (depending on the RPMs). The effect is even more pronounced on a bike. I can go bombing around twisty roads in second gear, winding the RPMs up to the 8,000 RPM mark (my bike redlines at 9K) and, when I get off the throttle, the bike will slow itself for the next turn. If I do it right, it’s a sublime experience and one of the reasons I love riding so much.

But the Zero has no such compression. So, if you whack the throttle open, the bike happily jumps forward and accelerates like a scalded cat but, when that tight corner comes up fast, you have to get on the brakes to whoa the bike down. Rinse, repeat. It got annoying pretty quick.

Another issue with the Zero is range. Not “range anxiety” but simply, it can’t go as far on a charge as I like to ride in a couple of hours, let alone all day.

My FJR has a 6+ gallon fuel tank and generally gets about 40mpg at a “spirited” pace. So, about 200 miles from the last gas station, I fill up. I’ve been known to fill up two or three times a day. (Yeah – I ride a lot. I bought the FJR eight and half months ago and I’ve already got almost 14,000 miles on it. I ride it year round and almost every day.)

The Zero has a stated “combined highway and city” range of 102 miles (under ideal conditions) before it needs to be recharged and a full (to 95%) charge takes eight hours.

To make matters worse, we live in Chilliwack – 71 miles outside of Vancouver, BC, and we go into the city almost every weekend. The Zero wouldn’t be able to make the round trip.

To be fair, the Zero isn’t designed for or marketed at folks like me who want to ride all day. It’s meant to be a commuter or weekend warrior bike. But, at a MSRP of $15,000+ US, that’s an awfully expensive toy for just bombing around town.

If all you want is a daily commuter or a weekend bike to pop across town, there are much cheaper options available to the casual rider. And if you are a “serious” rider who puts on miles and miles on your ride, the Zero’s relatively short range makes it a non-starter.

Next, we rode the Polaris Slingshot. 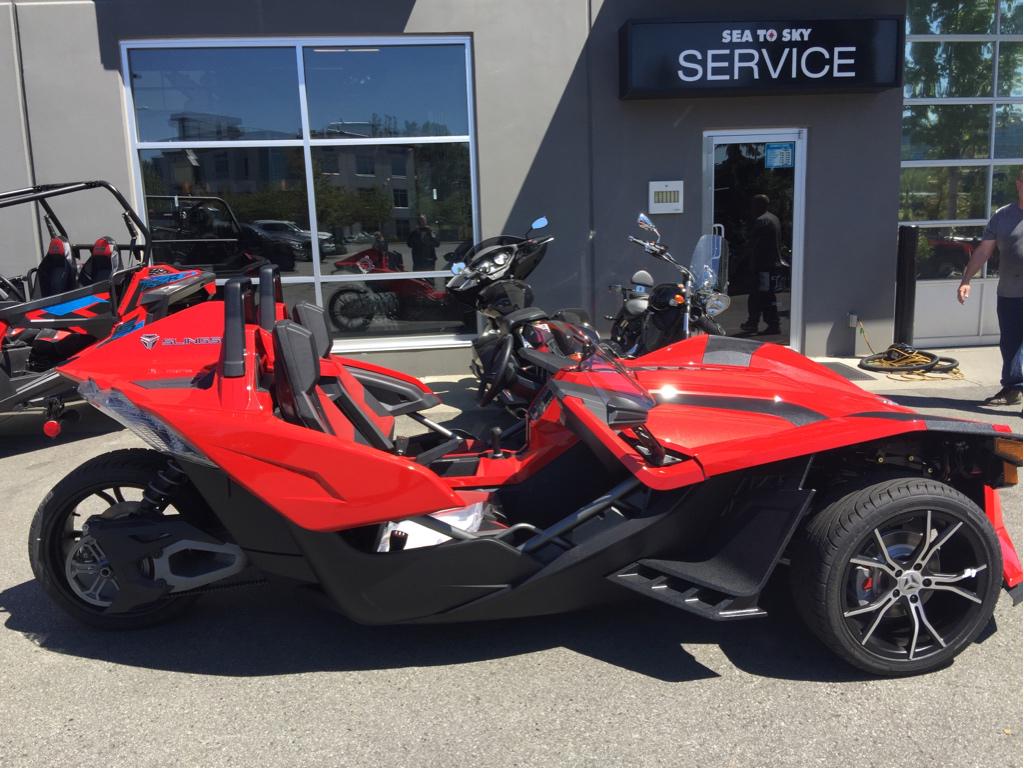 From afar, it looks really cool. But, as you get closer and actually examine it, it becomes much less so. The plastic used (and they use a lot) for the body and dashboard feels very cheap. The turn signal was so far away, it required me removing my left hand from the wheel. The seats, while moderately comfortable on the short test ride, got incredibly hot.

The riding position seems cool – you’re butt is only 11 inches off the pavement – but, once in traffic, you feel very vulnerable and unable to scan the road ahead of you any further than the SUV blocking your way.

The driver’s cockpit was cramped for my 6’3″ self and, because of the hard plastic, dug into my right knee as I drove. Likewise with the steering wheel – it felt very video game-ish in its construction. The foot well is also very tight. I could only get my left foot in one position – not good for riding comfort.

The Slingshot feels much wider than it actually is (in fact, it’s wider than a Lamborghini Huracán), not helped by the low seat position and high fenders. So you start off tentative and unsure of where your front wheels are. The engine is a four cylinder, 2.4L DOHC that provides a nice amount of acceleration but it certainly isn’t Zero territory. And the sound? Meh. Not growly enough for its look and very hollow sounding. On a vehicle like this, when I put my foot down, I want it to scare small children and make dogs bark at me.

The slingshot is a permanent convertible – which, if you’re in the right climate, is a great thing. But I live in the Lower Mainland. The Slingshot would be garaged 6 months out of the year. It has a windshield of sorts but it provides only minimal protection. Or, in the case of the bug that smacked me in the forehead when I was driving, none at all. Eye protection is highly recommended.

All that being said, the Slingshot is a blast to drive hard on twisty roads. Again, my test ride was relatively short and because I didn’t want to thrash it too badly, I didn’t push the limits but there were a couple of times when I just threw it into a tight curve and the single rear wheel, which felt skittish at low speeds, pushed the nose right where I wanted it to go.

The open cockpit and wind in your face feel definitely gave it a wonderful old school roadster vibe and the side by side seat position was great. And the looks we got as we drove around were pleasing to my (low) sense of vanity.

MSRP is $20,000US. For not much more than that, you can buy a Mini Cooper, get a roof/weather protection, A/C, a better stereo, have just as much fun slinging it around curves and have no worries about bugs kamikazing you in the face.

Both of these vehicles seem to be in search of a market but I think the Zero will get there first. The practicality of the Zero can be argued much more easily than that of the Slingshot — as can its future. The next iteration(s) of the Slingshot may iron out the annoyances but, if forced to choose….I’d still go with my FJR.

Longer distance riding than the Zero, more accleration and power than the Slingshot, priced similar to both, (surprisingly) more storage capacity than either, all mean I won’t be giving up my FJR any time soon. Thank God.

One thought on “FJR vs Slingshot vs Zero”